Hippus: A City on a Hill?

During Jesus' Galilean ministry he delivered perhaps the world's most influential sermon - dubbed the Sermon on the Mount (Matthew 5-7; Luke 12).  In this sermon the greatest rabbi and theologian asks His hearers to weigh their actions against Torah - removing the already difficult standard of the righteousness of the elite and replacing it with faithful obedience.  The teaching delves deeply into the conscience of its hearers by teaching wisdom through everyday occurrences.  Jesus the consummate teacher and illustrator as He often did, once again, used the 1st-century Galilean sites and sounds of his surroundings to portray His timeless and boundless truths.  Among the many illustrations, the King of the Universe compares the manner of a believer's obedient life to a "city set on a hill that cannot be hidden” (Matthew 5:14b ESV) hmmmm....  Interesting - more on that later.

I think it is important to note that Jesus taught almost exclusively outdoors and the majority of the time in Galilee both among and to farmers and fishermen.  He knew the realities each faced in this complex, eclectic region.  Consider the following map: 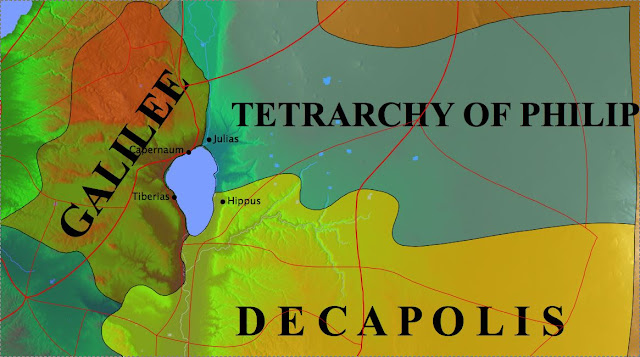 Notice the three big regions.  Galilee was ruled by Herod Antipas (Herod the Great's son) with his capital in Tiberias it was primarily Jewish with cities like Capernaum and Chorazin on the western half of the Lake.  The Tetrarchy of Philip - most of which was in modern Syria and the Golan Heights.  Philip had a very small sliver of the lake where Philip (also the son of Herod the Great) established the city of Julia - his populace was a mix of Jew and Gentile.  The eastern half was under direct Roman rule with the free city-states of the Decapolis (literally 10 cities - although it was more than that - this would be cities like Gadera, Gerasa, Scytholpolis and Hippus). This region was almost exclusively Gentile. The casting out of demons into swine Matt. 8:30 happened in this region.  All three of these regions would have their own governmental (read taxation) system and radically different diets.  One can easily imagine the Jewish fishermen selling the non-kosher fish to their Gentile neighbors in an attempt to sell all of their catch.  It was within this cultural context that the Son of God was revealed and eloquently interacted.

I say all of that to make one observation from the Sermon on the Mount.  I will do so in the form of a question.

Is it possible that Jesus was referring to an actual city when he said “You are the light of the world. A city set on a hill cannot be hidden?"   I think he may have been - examine the following images. 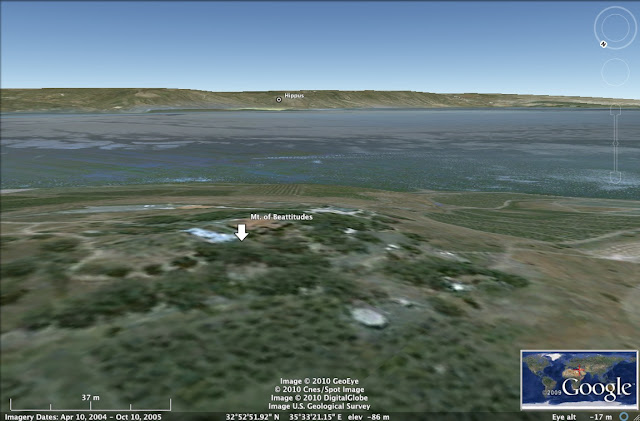 This is a view of the traditional location of the Mt. of Beattitudes (likely its a small hill between Capernaum and Tabgha) looking southeast at Hippus - the only major city sitting on a hill during the time of Jesus in the vicinity. 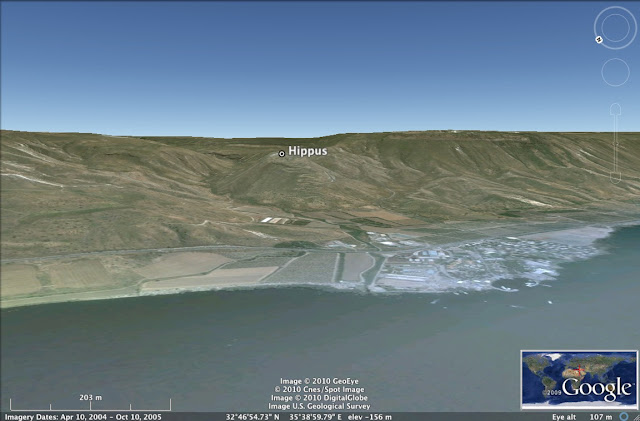 Hippus/Susita (horse) named such because the city resembled a horse's head as it sits alone connected to the Golan Heights by a small spur line. 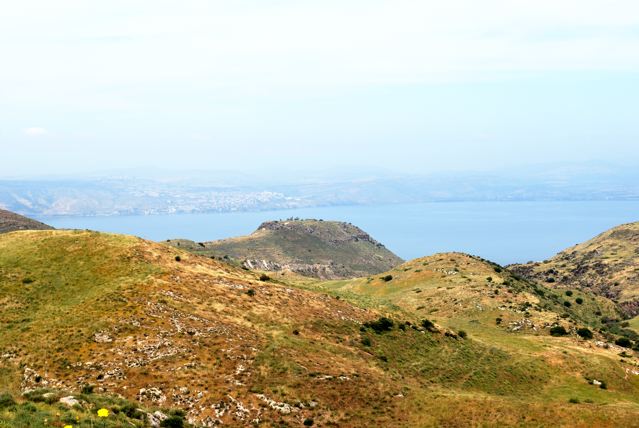 View from the east looking west across the Sea of Galilee to the Plain of Gennesaret and Tiberias.  Looking at the back of the head of a very schematic horse (with no mane or ears of course). 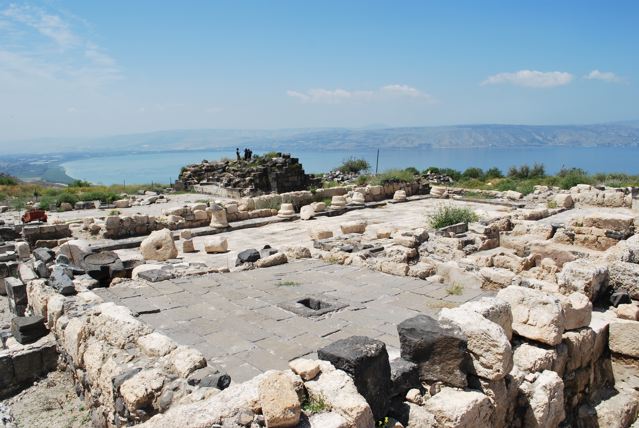 Would it have been shining?  Probably not Thomas Edison would not be born until about 20 centuries later, but Hippus would have had large tall Roman buildings like these (remains are a little later but are indicative of the city) made out of white limestone shining in the hot Galilean sunshine.  The Decapolis city could have easily been seen from all locations around the Lake, as the hill can still be readily spotted today. 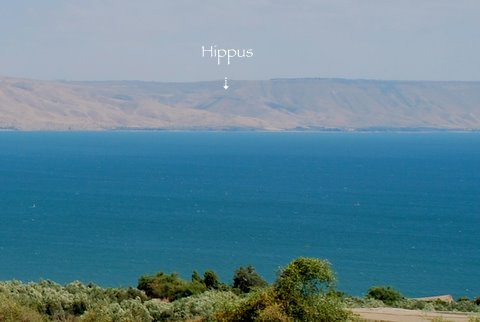 More or less the same view as the first one.  Clearly Hippus could have easily been seen by Jesus' audience. (all images Google Earth and Mindy McKinny).

It could be that Jesus not only pointed to Hippus (or maybe shrugged his head there emphatically) when he referred to a "city on a hill that cannot be hidden," but he also looked to the eastern shore later in his message when he said the following: “Do not give dogs what is holy, and do not throw your pearls before pigs, lest they trample them underfoot and turn to attack you.” (Matthew 7:6 ESV)  Pigs would have been found in abundance on the eastern shore (remember Matt. 8:30) and would have been very scarce on the Jewish western shore from where Jesus was speaking.

In the end this argumentation cannot be proven - it is difficult enough to uncover the meaning of texts -  all the more difficult to discern a speaker's thoughts and unrecorded actions.  Regardless, I believe interacting with the text geographically provides it with a certain realness that it might not have otherwise.  Most believers believe the Bible is inerrant (free from error), but sometimes we forget that its people lived in a real place, in a real time, with real geographicall realities.
Posted by Chris McKinny at 1:38 PM