Some Thoughts on Revelation 1-3

In church last Saturday (yes that's the only weekend-day in Israel) we discussed the seven churches of the Revelation.  All in all it was a solid sermon that discussed the various churches of Asia Minor - highlighting their strengths and weaknesses while discussing and hoping to prevent our own.  I always enjoy good, text-based sermons on the Revelation, because of its vast richness and imagery. As I was sitting in my chair attentively listening to the sermon I noticed a few things in King Jesus' proclamation that I had never picked up on before.  Here is one of them.

Many preachers and expositors have noted the similarity between Christ's figure in Rev. 1:12-15 and the figure of an unidentified person in Dan. 10:5-6.  Some even go so far as to say that this striking similarity indicates that the person in Daniel is none other than the pre-incarnated Lord Jesus.  Personally, I think that is a bit of a stretch mainly due to the fact that the identification of the character of Dan. 10:5-6 is later revealed as an angel who was held up by the "Prince of Persia."  Even if one were to say that the person of Dan. 10:5-6 was a different person than the "he" that comforts and speaks to Daniel that would mean that the person of Dan. 10:5-6 failed in delivering the message to Daniel and needed another angel (Gabriel?) to step in, which of course would again argue that the person is not Christ.  Nevertheless, John/the Holy Spirit through the vision of the Christ is for sure picking up on this similarity of appearance to make a distinct connection between the apocalyptic prophecies of Daniel and the coming Revelation.  Note the following similarities:

"a man clothed in linen, with a belt of fine gold from Uphaz around his waist. His body was like beryl, his face like the appearance of lightning, his eyes like flaming torches, his arms and legs like the gleam of burnished bronze, and the sound of his words like the sound of a multitude." (Daniel 10:5-6 ESV)


“Then I turned to see the voice that was speaking to me, and on turning I saw seven golden lampstands, and in the midst of the lampstands one like a son of man, clothed with a long robe and with a golden sash around his chest. The hairs of his head were white, like white wool, like snow. His eyes were like a flame of fire, his feet were like burnished bronze, refined in a furnace, and his voice was like the roar of many waters.” (Revelation 1:12–15 ESV)


This Daniel connection is clear, but could there be more at work than just a textual connection?  Maybe.  Could it be that Jesus was revealing himself to John in his Melchizedekian, priestly garments (vs. the earlier prescribed Aaronic garments) in the midst of his "real" sanctuary?  Definitely the book of Hebrews was in existence during the time of John's vision (95-96 AD - Hebrews was written pre-70 AD) and would have been known by the apostle "whom Jesus loved."  Unconvinced? Consider these passages.

“You shall speak to all the skillful, whom I have filled with a spirit of skill, that they make Aaron’s garments to consecrate him for my priesthood. These are the garments that they shall make: a breastpiece, an ephod, a robe, a coat of checker work, a turban, and a sash. They shall make holy garments for Aaron your brother and his sons to serve me as priests. They shall receive gold, blue and purple and scarlet yarns, and fine twined linen.” (Exodus 28:3–5 ESV) 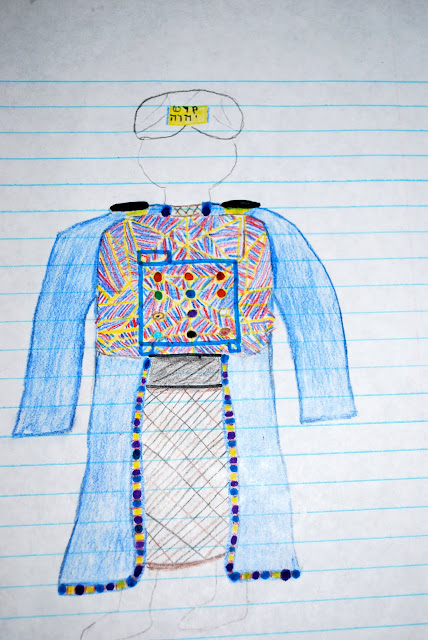 My own very meager attempt at reproducing the high priestly garments based on Exodus 28.  Yes, I am aware that my high priest's body shape is "formless and void."

“For it is evident that our Lord was descended from Judah, and in connection with that tribe Moses said nothing about priests. This becomes even more evident when another priest arises in the likeness of Melchizedek, who has become a priest, not on the basis of a legal requirement concerning bodily descent, but by the power of an indestructible life. For it is witnessed of him, “You are a priest forever, after the order of Melchizedek.” For on the one hand, a former commandment is set aside because of its weakness and uselessness (for the law made nothing perfect); but on the other hand, a better hope is introduced, through which we draw near to God.” (Hebrews 7:14–19 ESV)


“Now the point in what we are saying is this: we have such a high priest, one who is seated at the right hand of the throne of the Majesty in heaven, a minister in the holy places, in the true tent that the Lord set up, not man. For every high priest is appointed to offer gifts and sacrifices; thus it is necessary for this priest also to have something to offer. Now if he were on earth, he would not be a priest at all, since there are priests who offer gifts according to the law. They serve a copy and shadow of the heavenly things. For when Moses was about to erect the tent, he was instructed by God, saying, “See that you make everything according to the pattern that was shown you on the mountain.” But as it is, Christ has obtained a ministry that is as much more excellent than the old as the covenant he mediates is better, since it is enacted on better promises. For if that first covenant had been faultless, there would have been no occasion to look for a second.” (Hebrews 8:1–7 ESV)


These passages show the existence of a heavenly "real" sanctuary, but what might that sanctuary look like? Moses gave the Israelites a "type" tabernacle through the decrees of Torah, but he was only able to re-construct it based on the vision he saw on Mt. Sinai.  Among other things this tabernacle included a seven-branched lampstand (known as the menorah popularized by the holiday of Chanukah and the arch of Titus in Rome). 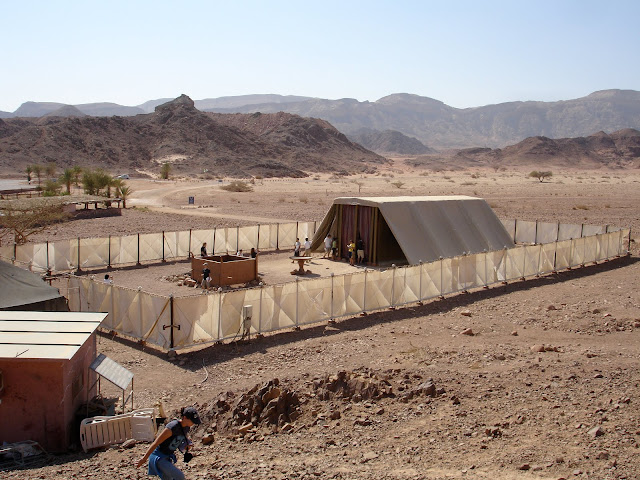 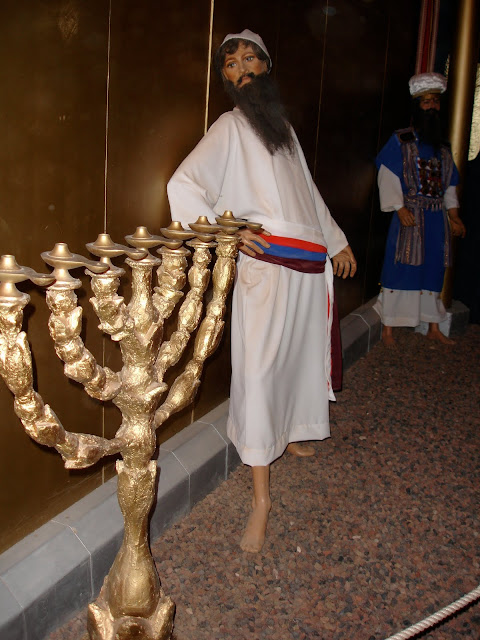 Seven-branched lampstand (also known as a Menorah or a candelabrum) also inside Timnah's model.  Their depiction of the high priest garments are in the upper right of the photo.

Where is the impressively dressed King Jesus in the Revelation 1 passage? "In the midst of the (seven golden) lampstands." Could these lampstands be what Moses saw and tried to duplicate in the menorah?  It is important to note that the term "lampstand" in the Bible is only used in conjunction with the tabernacle/temple precinct (save one reference in Daniel 5:5 - but there it is talking about a lampstand in Belshazar's palace).  The lampstand is inexorably tied to the tabernacle/temple - why should that connection stop in Revelation?  Conversely, it is true that Rev. 1:20 says that the seven golden lampstands represent the seven churches of Asia Minor, but that does not exclude them from having further meaning or further inter-text relatedness.  It is my opinion that Revelation 1 is presenting a picture of the resurrected Christ that is a witness both to his coming judgment on the world (Daniel connection, which will be further expounded upon in Rev. 4-21) and his covenant, high priestly mediation for his beleaguered and persecuted church (Hebrew/Melchizedekian connection which covers Rev. 1-3).
Posted by Chris McKinny at 2:34 AM