Recently there seems to be a lot of e-mail traffic regarding Biblical "archaeology" apologetics.  The two most prevalent email forwards that I have encountered are the "Exodus Route" and the "Giant Skeletons=Nephilim."  I have been asked by a few different people about the veracity of the claims laid out in these emails - so here is my answer.  The short answer - these "apologetics" are almost always a sham which mix very little truth with a lot of baloney.  Concocting a tasty cocktail of flashy images, bad history, and horrible "archaeology" these emails offer up seemingly helpful answers to thirsty Christians.  I think my former professor, Todd Bolen, has coined the best principle statement for dealing with email forwards like these - "I might suggest a simple principle for dealing with matters like this in the future: if you heard about it first in an email forward, it’s not true." Both humorous and accurate - always a good combo.  Read more about his thoughts on the "Giant Skeletons" here (also see Michael Patton's thoughts on the dilapidated forward here).

In what follows I will attempt to debunk the "Exodus Route" email forward that I have received from a number of different people.  For reference you should open the slide show in another window to follow along with my critique - you can do that here.

The first question you have to ask is.  "Was it possible for the Israelites to leave Goshen and make it to the proposed crossing and Sinai site in the Biblical time frame?"  Generally scholars believe that armies could travel on average 15 miles per day (document from a contemporary source say such - Pharoah Thutmose III).  Some Biblical scholars estimate that it took the Israelites 7 days to get to where they crossed the Red Sea (better understood as Yom Suf - Sea of Reeds a tributary of the Red Sea much further inland) (Ex. 13:3,4; 12:33f.; Deut. 16:3; Lev. 23:42-43) others believe that it would have been closer to 9 days (three days at each campsite Succoth, Etham and Migdol).  In either case its roughly 100 miles from Pithom and Ramses (where the Israelite started) to Suez city (the traditional crossing point) (7x15 miles = 100 miles).  Remember this group of Israelites is estimated at being around 2 million people at this time (by conservative scholars) - and even though they were in a hurry they could not have averaged more than 15 miles per day.  The map shown in the PowerPoint adds an additional 200 miles between the leaving of Egypt and the crossing of the Red Sea.  If this is the crossing the Israelites would have had to travel around 30 miles a day to get to their crossing point. If the Bible is to be taken literally - which is supposedly the point of this whole PowerPoint - see the last slide - than these claims are not only biblically improbable, but humanly impossible.  These proposed theories were made popular among Christians by a former police detective, Ron Wyatt and his two sons in the 1980s.

The Proposed Crossing Point and Alternative for Mt. Sinai

Simply put, its a sham.  The golden wheel is a complete fabrication (based on numerous sources from the internet and scholarly articles) of Ron Wyatt's and the other so called wheels and remains are part of the amazing coral reef that runs throughout the Red Sea (in fact the coral reef makes it the second best scuba and snorkel destination in the world behind the Great Barrier Reef in Australia).  On the other hand I personally have found a genuine "wheel" in the Red Sea. 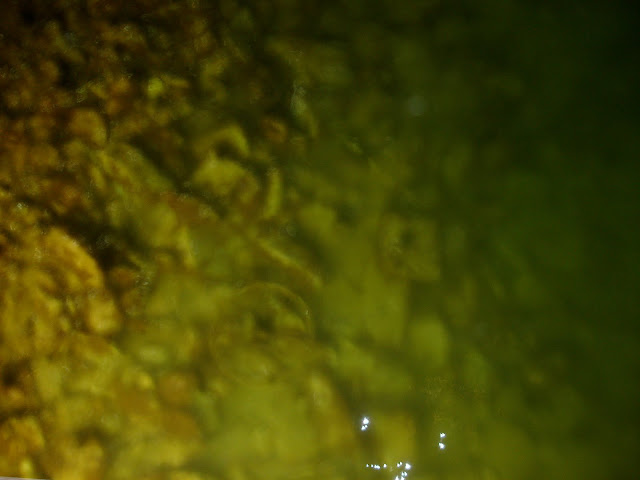 A "wheel" at the depths of the Red Sea
Also the proposed Solomon's pillars have zero context with which to label them - they are not inscribed - nor did Solomon ever have dominion over this region never, ever - the furthest domain of Israel in the south is Eilat, which is at the very tip of the Red Sea (where I found the "wheel" that has just as much legitimacy to the claims of Ron Wyatt).  The main problem with all these theories is that most of his assertions provide zero archaeological context, meaning that they are either untraceable as far as their date or that the archaeological context is completely ignored.  The core of archaeology is dating - the main tool for dating is pottery (inscriptions are very rare and sometimes are inconclusive for dating).  The one place where there actually is legitimate archaeological remains is at the proposed site of Mt. Sinai (Jebel al Lawz) and the vast majority of pottery is Nabatean (2nd cent B.C.E. (B.C.) - 3rd Cent. C.E. (A.D.)) much, much later than the 1400 B.C.E. Exodus.  As far as his claim that the split rock at Mt. Horeb is the one in the picture - it's just ridiculous - the area of the Arabah (Southern Israel, Southwestern Jordan, and Western Saudi Arabia) is one of the most geologically diverse places on the globe.  I have personally seen dozens if not hundreds of rocks similar to that in sandstone areas such as the Wadi Rum (Jordan - of Transformers 2 fame) and the Sinai Peninsula. 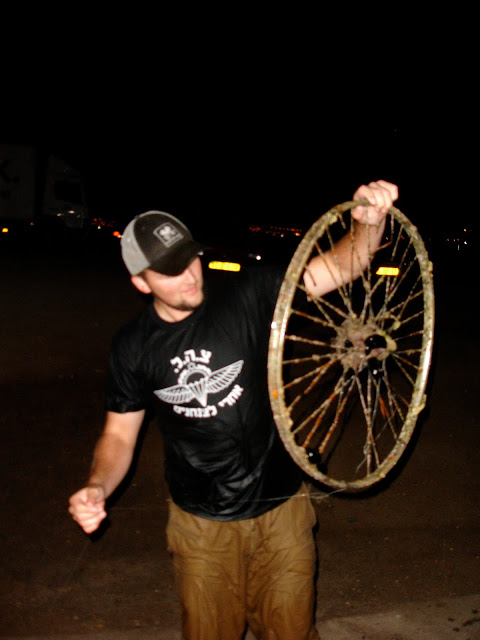 Let's just say that it looked shallower than it was - but once you're soaked you might as well go for it. 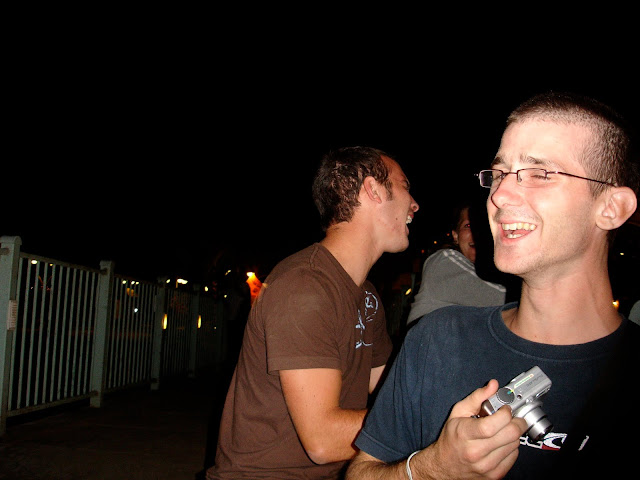 I received the reaction Ron Wyatt should receive.
In short - Ron Wyatt is the Benny Hinn of Archaeologists - he is a charlatan who plays on the emotions and good intentions of American Evangelicals.  Not surprisingly he has also claimed to have found the Ark of the Covenant, the location of Noah's Ark, the charred remains of Sodom and Gomorrah along with the real Mt. Sinai (what else is there left to find?).  I read three of his books in high school - he is a provocative writer that claims to be a better archaeologist than Indiana Jones.  Truthfully, there is more legitimacy to the finds of Indiana Jones than there is Ron Wyatt's - at least Henry Jones Jr. found the Ark of the Covenant and the Sacred Grail in an archaeological context and at least he was a "Dr." and a professor of archaeology!   It takes more to be an archaeologist than being good at detective work and a good writer.  It takes years of careful study of history, stratigraphy (levels of remains - mainly pottery), philology (study of ancient languages), historical geography, the history of research, and many other sub-disciplines - Wyatt has zero training, zero qualifications, but yet all the answers.  Moreover, the goal of archaeology is not to prove the Bible to be true, but to illuminate it.  My archaeology professor (Gabi Barkay) says that the Bible does not need archaeology it can stand alone on its own merits.  He is exactly right - the goal of archaeology is to understand the world of the ancients, to understand what a specific object meant to a specific people.  This type of work is not archaeology its speculation that seeks to prove something that is by its very nature unprovable.  Understand me though - although archaeology cannot provide definitive proof that the Bible is 100% percent true, that its inspired, that it is 100% historical - it can provide proof to much of what the Bible speaks of.  For instance much of higher critical theory has claimed that the persons of David and Solomon never existed - in the last 30 years two inscriptions have been found one in Israel and one in Jordan that mention the "house of David" referring to the line of kings of David - providing substantial proof that David was in fact a real person and that he lived during the time that the Bible describes.

This PowerPoint is in the vein of the mass emails about the missing days in the universe being attributed to Joshua causing the sun to stand still and other emails like it directed at the emotions of well-intending American Evangelicals who have no clue about archaeology (I don't say that pretentiously - most people are not privy to archaeological theory - and even good Biblical scholars are lead away by these theories).   That is where the real harm is done in these emails and other so-called "Bible Proofs" - because well-meaning believers take these type of things and seek to argue for the historicity of scripture using these as their proofs - they are basing their faith on a very sandy foundation and have given atheists and biblical critics (who are "in the know") a way of poking fun at the Bible.  It can shake the faith of a young believer who is shown that this is a sham, much like a new believer's faith can be shaken whenever he sees that Benny Hinn's healings are a crock.

Truthfully, the only truth embedded in this PowerPoint is the first picture which identifies the well of Sychar as being Jacob's well - this identification is well-attested and has good standing in both tradition, text, and archaeology, but is hardly a basis for proving the Bible's veracity.

If you want to look at it more here is an article discussing the the Exodus route and the various options for Mt. Sinai.
Posted by Chris McKinny at 12:02 PM

We are told it would have been very difficult for such a multitude wandering around out on the desert to have lived for more than a short time. Yes, and the same could be said about one person out on the desert. They are forgetting God, Who supplied water, meat (quail) and daily bread (Nehemiah 9:20). They believe that encampments of such a multitude would have left some sort of “trash” for them to follow, but they are still trying to figure out which route the children of Israel were on. “Yea, forty years didst thou sustain them in the wilderness, so that they lacked nothing; their clothes waxed not old, and their feet swelled not.” (Nehemiah 9:21) There was no thrown away, worn-out clothing, no piles of leftover manna as it melted (Exodus 16:21), and they left no “soda bottles or gum wrappers” for them to follow. As others have brought out, the Israelites the critics are looking for never existed, because they do not believe God provided for them, but the truth is Israel “lacked nothing”! Their inability to find something is what they offer as proof! They only recently found (2002) the “workers’ village” for the pyramids of the Giza Plateau. It is estimated this town housed 20,000 people and was built out of bricks, whereas the children of Israel lived in tents. And this discovery only came after they had searched every inch of the Giza Plateau for the last two hundred years of archaeology. See this site with new info on the Exodus = http://www.sinai-horeb.com/