Sometimes we empathize with the actions of Pontius Pilate - seeing the difficult situation he was put in, acknowledging that it was not he who plotted out Christ's death, and recognizing that he understood the Lord of Glory to be innocent.  While all of these things are true - that does not excuse Pilate's ploy to punish Christ with flogging nor his verdict to murder the Culmination of all Innocence.  He had the power to do the right thing, the power to act judiciously, but chose not to.  Pilate was a coward whose cowardice caused him to be a murderer.  What makes his murdering cowardice all the more appalling are his thoughts.

“So when they had gathered, Pilate said to them, “Whom do you want me to release for you: Barabbas, or Jesus who is called Christ?” For he knew that it was out of envy that they had delivered him up."

Even worse than his conscience condemning him is the fact that his own wife's conscience was pricked and supernaturally warned.

"Besides, while he was sitting on the judgment seat, his wife sent word to him, “Have nothing to do with that righteous man, for I have suffered much because of him today in a dream.”
(Matthew 27:17–19 ESV) 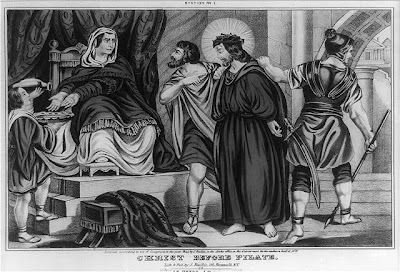 See painting's bibliography here.
Despite this Pilate still murdered - butchered the Wisdom of God.  His attempt to wash his hands of the situation is laughable since his approval, and his approval alone (from a human, judicial perspective) allowed the Light of the World to be crucified.
Posted by Chris McKinny at 3:09 AM