There are many interesting aspects about the Biblical story - many fascinating tidbits that can only be gleaned by being in the land and seeing and experiencing how the land fits together.  Here is one of my favorites. 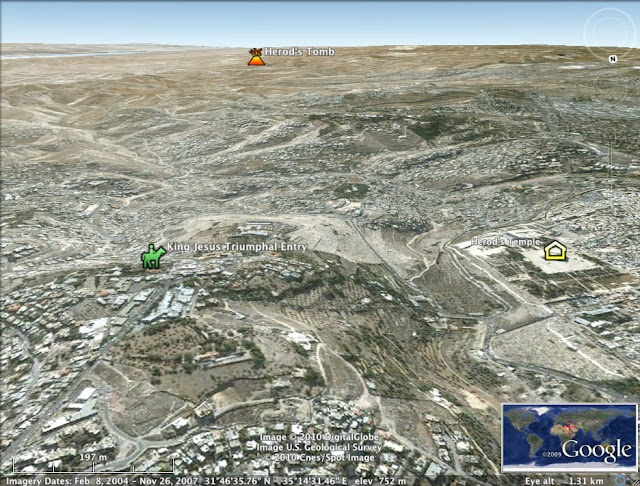 As King Jesus made his way up and over the Mt. of Olives, while the deafening throng erupted with shouts of Hosannah, the coronation of the true king of Israel finally was realized.

Imagine the amount of conflicting emotions the Lord experienced - joy, fear, anxiety, foreboding, and quite possibly irony.   The tomb of Herod the Great (or at least Herodium where the tomb was) could be seen quite clearly from the route the King of Kings took on his way to Jerusalem.  It's quite probable that Jesus looked to his left, towards the Judean Wilderness and the Dead Sea, and saw the tomb of the jealous "king" who once sought to have Him murdered by killing the babies of David's city - the king who claimed to be the true king of the Jews now rotting in an illustrious tomb unloved and still posthumously trying not to be forgotten.  Jesus was about to show Israel and the whole world what true kingship was all about.
Posted by Chris McKinny at 10:04 AM

Awesome. I love these kinds of insights. Keep 'em coming.