The Mesha Stele as an Archaeological Artifact and Historical Document

This upcoming semester I will be researching and preparing for my Master's thesis. My planned topic is "The Geopolitical Climate of the Reign of King Jehoshaphat of Judah." The following short paper that I finished last semester was instrumental in helping me decide on this topic. The reign of king Jehoshaphat is a fascinating period in the kingdom of Judah that connects all of the small nations of the Levant (present-day Israel, Jordan, Syria, Lebanon, and part of Turkey) I will probably be blogging on this topic more in the future.

The Mesha Stele (or the Moabite Stone) is a three feet tall by two feet wide basalt stone from biblical Dibon incised with 34 lines of alphabetic writing on one side of the stele with a raised frame surrounding it on both sides and on its rounded top. Its length makes it the longest monumental inscription ever found in Palestine.[1] The writing is in Moabite, which is very close to Hebrew.

It was first discovered on August 19, 1868 by a French Anglican minister named, F.A. Klein, in Dhiban, Jordan, about three miles north of the Arnon River. [2] Klein discovered it while visiting a Bedouin tribe at Dhiban, when he saw it he understood it to be an importance artifact and tried to purchase it from the Bedouin. After some ensuing bargaining the Bedouin agreed to sell it for 120 napoleons (about $480) with the backing of the Prussian government. Despite the agreement local Bedouin politics would not allow the stone to be shipped out of Dhiban. Over a year later 21-year old Charles Clermont-Ganneau would send an Arab friend to Dhiban to establish its importance who would return with a hand copy of seven lines of the stone. Once Clermont-Ganneau received this he dispatched another Arab friend, named Karavaca, to take a paper squeeze and to offer a much higher sum than had been offered previously. The Bedouin of Dhiban agreed to this so Karavaca began to make the paper squeeze. Meanwhile, a fight broke out among the Bedouin and Karavaca feared for his life so he jumped on his horse and ran away. During the quarrel Sheik Jamil had the wherewithal to tear off the wet impression before scurrying away from the scene. Finally after numerous attempts to take the stone by the Turkish government and the Prussian government the Bedouin destroyed the stele. They broke it into countless pieces by pouring cold water on it after it had been heated in a fire. The fragments were then distributed among the Bedouin who put it in their granaries to be used as a talisman. After its destruction Clermont-Ganneau and Charles Warren were able to obtain 57 pieces of the stele, approximately 2/3’s of the stele. With the paper squeeze Clermont-Ganneau was able to fully reconstruct the stele. When it was translated it turned out to be a victory stele erected by Mesha, king of Moab in the ninth century BCE.[3] 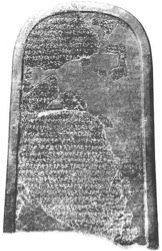 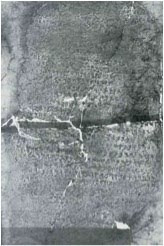 The line of “house of David” in the famous Tel Dan inscription was accepted by the majority of the scholarly community to be a reference to the dynastic kingdom of Judah and the person of David. This monumental discovery was hailed as being the first mention of the name of David in an inscription. However, two years prior to its discovery Andre Leimare had already come to believe that the dynastic term “house of David” was on the Mesha Stele, another stele from the 9th century BCE. He came to this conclusion by studying the paper squeeze that had not been published previously.[6] On the evidence for coming to his conclusion Lemaire writes,

“One of the damaged lines has long posed an intriguing challenge to scholars. Line 31 on the stela begins by saying, “And as for Horonen, dwelt there … ,” but a break has partially obliterated the subject of the sentence. With the help of the squeeze, scholars had previously restored the broken subject of the sentence as bt[-]wd. Now, for the first time, Professor Lemaire proposes to reconstruct the missing letter as d, yielding bt[d]wd, “House of David,” referring to the king of Judah. This not only fits the context of the inscription, but the sentence structure parallels an earlier reference in the inscription to the “king of Israel.” In the Bible, “House of David” often refers to the king of Judah (2 Samuel 7:26; 1 Kings 2:24, etc.).”[7]

This groundbreaking restoration gives another mention of the name “David” and improves the understanding of the context on the Mesha Stele.[8]

Besides the obvious historical significance of the mentioning of the name of David, the Mesha Stele provides detailed data regarding the relations between Judah, Israel, and Moab.[9] The opening line of the stele identifies the inscription’s author as it says, “I am Mesha the son of Chemosh king of Moab, the Daibonite. My father reigned over Moab thirty years and I reigned after my father…”[10] 1 Kings 3:4-5 mentions this Mesha king of Moab who rebelled against Israel who had previously required from Moab “100,000 lams and the wool of 100,000 rams.” The Mesha Stele goes on to describe Mesha’s military successes against Judah and Israel. He mentions that his father was under the dominion of Omri and “his son” for forty years. Their holding of the “land of Medeba” (the plateau situated between Moab, Ammon, and Israel) evidenced this. Mesha goes on to say that during his days Chemosh had returned Medeba to Moab and he rebuilt Baal-maon and Kiriaten.. Mesha then proceeds to discuss his military exploits these include the following:

1. Conquering of Ataroth from the men of the tribe of Gad, and the confiscating of the Davidic altar hearth there.

2. Seizing and slaughtering of Nebo, and the confiscating of the altar hearth of YHWH.

3. Conquering of the recently Israelite fortified city of Yahaz (which he added to the kingdom of Daibon).

1. Fortification of Dibon, which included: “the wall of the forests,” “the wall of the rampart,” gates, towers, a royal palace, a water system (with Israelite POWs), and cisterns in every home.

There is has been quite a bit of debate regarding the mentioning of the tribe of Gad and the two altar hearths ascribed to David and Yahweh. Even so a straightforward reading of the text seems to indicate that there were altars at Ataroth and Nebo devoted to the worship of Yahweh of which one of these was built by David or his line and that the tribe of Gad still had a remnant in Transjordan in the time of Mesha (9th cent.).[12] Regardless of one’s view of its particular contents it is impossible for anyone to deny its importance as a historical and geographical source. On the importance and nature of the Mesha Stele Ahituv writes,

“The Mesha Stele is important for the abundant of multifaceted details it preserves. It elucidates in relatively large measure the details of the military actions of Mesha king of Moab, contemporary with Ahab king of Israel and Jehoshaphat and Jehoram, kings of Judah, as well as his building projects over an extensive period of time. It would appear that the inscription is a summary of Mesha’s actions up to the date of its writing. It addition to the historical data provided, it is the main witness to the Moabite language. It also gives important insights into the religion and religious attitudes of the Moabites in that period. This includes many points of similarity between the Moabites and their neighbors, the Israelites: the ritual devotion to destruction, the belief that the deity is angry with his people when things go wrong, or that he fights on behalf of his people. The stela also casts light on the world of the Israelites, e.g. we learn about a sanctuary to YHWH at Nebo”[13]

Much ink has been spent on trying to correlate the events described in the Mesha Stele (particularly line 31 ff.) and the events described in 2 Kings 3:4 ff. However, it seems best to see the war between Moab and the coalition of Judah, Israel, and Edom and Mesha’s account as two sides of the same coin. Joram of Israel could not stand for Mesha’s insubordination and outright rebellion as show in 2 Kings 3:4-5 and the Mesha Stele, so he had to take drastic measures. Likewise Jehoshaphat and the “ruler of Edom” could not afford rebellion from Mesha, who had already earlier tried to invade Judah with the help of Ammon (2 Chr. 20). At first the allies were successful in their invasion of Moab (2 Kings 3:24-25), but eventually they were repelled and Mesha counter-attacked and re-conquered Hawronen (Horonaim). This would fit both the biblical account Mesha’s account while leaving out details that were not relevant to the respective audiences of Mesha and the writer of Kings.[14] Rainey defends this position this way,

“There is no contradiction between the biblical and the Moabite narratives: they simply represents different sides of the same event. Naturally, Mesha has conveniently skipped over his abortive attempt to launch a joint invasion of Judah (2 Chron. 20). That ill-fated campaign followed the death of Ahab at Ramoth-gilead (before Jehoshaphat and Ahaziah launched their nautical enterprise) and preceded the war described in 2 Kings 3 (when Joram had succeeded his deceased brother Ahaziah).”[15]

[9] For a translation and discussion of the Moabite in the Mesha Stele see Shmuel Ahituv, Echoes from the Past: Hebrew and Cognate Inscriptions from the Biblical Period, (Jerusalem: Carta, 2008). 389-418.

[10] Translation taken from Anson Rainey and Steve Notley, The Sacred Bridge: Carta’s Atlas of the Biblical World, (Jerusalem: Carta, 2006): 203. Transliteration and other marks are not included.

[12] For a discussion and in depth analyses on these very important issues see Anson Rainey, “Syntax, Hermeneutics and History,” IEJ 48 (1998), 244-251. Rainey summarily defends this position like this, “In summary, the reference to bt dwd in line 31 of the Mesha stele certainly refers to the kingdom of Judah. The ‘altar hearth’ taken as booty from Ataroth had beed donated to the Israelites from the tribe of Gad by David, or at least by the government of the United Monarchy. That these assertions shed positive light on the biblical sources for the tenth and ninth centuries BCE makes them automatically suspect in some circles. Nevertheless, these interpretations can all be supported by syntactical and rhetorical criticism of the text. They represent sound linguistic analysis, proper rhetorical hermeneutics and historical common sense.”

Posted by Chris McKinny at 8:56 AM