The Plain of Sharon

The Sharon Plain is situated along the Mediterranean coast bordered by the Plain of Dor[1] to the north, the Carmel Range to the northeast, the Basin of Samaria to the east, and the Valley of the Craftsmen[2] to the south.[3] The plain itself is 10 miles wide by 27 miles long (16 by 45 km.) south of the Crocodile River and north of the Yarkon River and its tributary the Wadi Qana.[4] The center and largest portion of Sharon is made up of Mousterian Red Sand ranging in height from 150-300 feet (60-90 m.).[5] Karmon describes the properties of the red sand this way, “The red sand consists of grains of sand, each covered with a thin coat of colloidal matter, rich in iron and aluminum oxide.”[6] To the west of the red sand are three parallel Kurkar ridges that define Sharon’s coastline and encroach 5 miles inland.[7] Karmon defines the properties of Kurkar like this,

“Kurkar are solidified sand dunes, which were cemented with the aid of calcareous solutions. The main source for the supply of calcium is probably the seashells, which cover the beach in huge quantities after every storm in winter, and in the north their fragments for a coarse sand, called ‘zifzif.’ These are found between Netanya and ‘Atlit and they are widest around Caesarea.”[8] 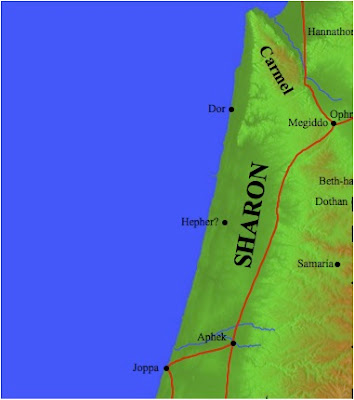 Sharon Plain with International Coastal Highway on the east

Moreover much of the Kurkar ridges themselves are covered with the red sand increasing the height of the ridge.[9] The combination of the red sands and ridges greatly impedes the drainage of the wadis coming off the hills of Samaria causing the area to become swampy.[10] This is particularly the case in the northern section where there are large quantities of sand dunes.[11] Because of its thick swamp, Sharon[12] in antiquity was densely forested with scrub brush. In antiquity the red sands were not cultivable as a consequence the region was not heavily settled, however, today the red sands are used to cultivate some of the finest citrus fruits in the world. Rainey calls this Mousterian Red Sand the citrus soil “par excellence.”[13] The combination of marsh and lack of deforestation due to its uncultivable nature in antiquity caused the region to be become densely forested. 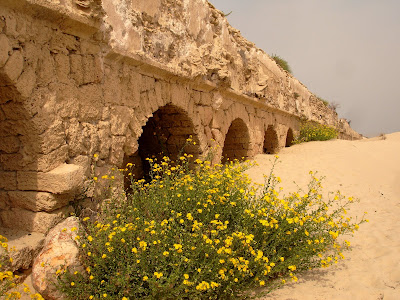 Herod the Great's Aqueduct from Mt. Carmel to Caesarea

The meaning of the Hebrew name, Sharon, is unclear,[14] however, the Greek name for the site in the LXX (Isaiah 35:2, et al) and in Josephus (War 1:12:2:250; Ant. 14:13:3:334) is Drumos, which means “Oak coppice.”[15] Concerning the name of the plain Smith writes, “The Maritime Plain between Carmel and Joppa was called in the Hebrew Sharon, probably meaning the Level, but in Greek the Forest, from a great oak forest which once covered it.” The Crusaders named it the Forest of Assur, Tasso Enchanted Forest, and the Napoleon Forest of Meski showing that the area was forested up until the medieval period.[16] Smith writes on the density of the forests in this way, “Sharon now scattered and ragged, it must have originally swept from the heights of Carmel to Aijalon.”[17] Today only a few of the offspring of the scrub oaks remain in Sharon.[18]

The place name “Sharon” occurs 7 times in the Bible (1 Chr. 5:16; 27:29; Song 2:1; Is. 33:9; 35:2; 65:10; Acts 9:35.) 1 Chronicles 5:16 mentions the name Sharon, “they lived in Gilead, in Bashan and in its towns, and in all the pasturelands of Sharon to their limits.” Based on the context this Sharon clearly is in the Transjordan area next to Gilead and Bashan somewhere within the tribal territory of Gad. Moreover, Isaiah 65:10 says, “Sharon shall become a pasture for flocks,” the implication was that it was not a pastureland at that time. This line of thought might also be applied to the other mentioning of Sharon in 1 Chronicles, which says, “Over the herds that pastured in Sharon was Shitrai the Sharonite.” The Plain of Sharon was not a large pastureland in antiquity, in order for there to be pasture there must be an abundance of grasses and a lack of dense forestation like the regions of Bashan and Gilead. The Plain of Sharon was covered with brush, marshy, and uneven, therefore not a likely candidate for sheepherders. Baly tries to tie the passages in 1 Chronicles together with the other references to show that it is a fertile land, but in so doing he misses the context of 1 Chronicles 5:16 and the irony of Isaiah 65:10.[19] Despite this Baly does acknowledge the difficulty as he writes, “The most that could ever be hoped for from Sharon was grazing on the fringes of the forest.”[20] Aharoni and Payne both came to the same conclusions regarding the references in 1 Chronicles 5:16.[21]

Consequently the region of the Plain of Sharon is referred to only 5 (maybe 6) times by name in the Bible (Song 2:1; Is. 33:9; 35:2; 65:10; Acts 9:35.) Each one of these passages (save Acts 9:35) either directly states or implies that Sharon is a region of fertility, beauty, and majesty. Song of Solomon 2:1 amidst numerous metaphorical allusions to nature’s beauty says, “I am a rose of Sharon” attesting to the abundance of flowers that grew there. Isaiah deftly uses Sharon to show quirks of fate. Isaiah 33:9 describes the coming of judgment of the Lord as causing “Sharon to be like a desert,” the implication is that it’s a fertile land and it would be shocking for it to lose its fertility. Isaiah 35:2 is the reverse of 33:9 as it describes that the “vengeance of God” will make the desert like “Carmel, Lebanon, and Sharon.” The Acts 9:35 account provides geographical data by placing the New Testament city of Lydda next to “Sharon.” In short the Bible’s idea of the Plain of Sharon is one of majestic fertility, but of uselessness for cultivation and herding. Smith gushes over the majesty of Sharon as he proclaims,

“The Maritime Plain possesses a rich but quiet beauty. If the contours are gentle the colours are strong and varied. Along almost the whole seaboard runs a strip of links and downs, sometimes of drifting sand, sometimes of grass and sand together. Outside this border of broken gold is the blue sea with its fringe of foam. Landward the soil is chocolate brown, with breaks and gullies, now bare of their dirty shingles and puddles, and now full of green reeds and rushes telling of ample water beneath. Over field and moorland millions of flowers are scattered – poppies, pimpernels, anemones, the convolvulus and the mallow, narcissus and blue iris – roses of Sharon and lilies of the valley. Lizards haunt the sunny banks. The shimmering air is filled with bees and butterflies, and the twittering of small birds, hushed now and then as the shadow of a hawk blots the haze. Nor when darkness comes is all a blank. The soft night is sprinkled with glittering fireflies.”[22]

In antiquity armies and caravans that travelled to Mesopotamia from Egypt and vice versa would have used the Great Trunk Route. For much of its distance this route runs along the coastal plain until it reaches the Yarkon and the city of Aphek, which forces the route northward in order to avoid the impassable swamps and forests of Sharon. Instead of traversing the Kurkar ridges and red sand dunes of Sharon travelers would have skirted the eastern edge of Sharon, the western seam of the foothills, in order to continue north through the Carmel Passes or to the port of Dor. The Plain of Sharon sits directly northeast of the Great Trunk Route this route would have been travelled by countless armies and caravans throughout history. Along this route there are some important cities that are on the border of this region those include: Socoh (1 Kings 4:110, Yaham, and Gath-Padalla. Caesarea also became an important city and port during the time of Herod the Great and following. Caesarea sits on the northwestern border of the Sharon plain before it is restricted into the narrow corridor of the Plain of Dor. The following is a summary of the historical events that occurred within the region.

[1] This is sometimes called the Coasts of Asher, this would be the southern coast of Asher that is sandwiched between Carmel and the Mediterranean and ends at the Crocodile River on the south. See Denis Baly, The Geography of the Bible, (New York: Harper and Row, 1973.) 118-119. Smith refers to the region as the “Maritime Plain.” George Adam Smith, The Historical Geography of the Holy Land, (Jerusalem: Ariel, 1966.) 112-124.

[2] This region is sometimes called the Lod/Lydda, Joppa, Aphek triangle.

[3] This delimitation is based on Baly’s boundaries. For a similar delimitation see Anson Rainey, A Handbook of Historical Geography, (Jerusalem: American Institute of the Holy Land Studies, 1984.) 221.

[10] Rainey discusses the wadis in Sharon as he says, “Several streams work their way from the foothills across the Sharon to the coast; among the most important are Crocodile River, Nahal Hadera, and Nahal Alexander which comes out of the foothills and curves NNE collecting several other streams until it finally turns west to the sea. Of lesser importance was Nahal Poleg. The Brook Kanah (Josh. 17:9-10) cuts across the plain to its outlet 3 ½ miles north of Joppa. It is joined by the biblical Yarkon (Josh. 19:46 LXX). Ibid, 221.

[14] On this topic Aharoni writes, “This name, which also applies to other regions in Palestine (1 Chron. 5:16), is taken by some to mean “level country,” but more likely means “forested region,” which aptly describes its nature and fits well the various biblical allusions.” Yohanan Aharoni, The Land of the Bible: A Historical Geography, Philadelphia: Westminster, 1979. 24-25.

Posted by Chris McKinny at 2:25 PM