Most of the day was spent hiking around the Nabatean city of Petra. The ancient city of the Nabateans was an amazing sight to behold. It is a unique place in the world. The Nabateans themselves are barely connected to the Bible (although they are contemporaneous with the intertestamental period through the Byzantine period). They rarely are mentioned in the Biblical text. There are some possible Old Testament connections in Genesis and Isaiah. Genesis 25:13 (1 Chon. 1:29 also) states that Nebiaoth was the firstborn of Ishmael, Genesis 28:9 and Genesis 36:3 mention that Esau married a sister of Nebiaoth (that would be his first cousin –Ishmael was his uncle), and Isaiah 60:7 mentions Nebiaoth in the context of trading caravans off the desert and off the sea. There are also a few indirect New Testament connections. Herod the Great’s mother was Nabatean (Josephus), Herod Antipas married then banished a Nabatean princess causing a military conflict that he lost (Josephus) and for which John the Baptist chastised him (Matthew 14), and some have equated the Nabateans as being the magi mentioned in Matthew 2. The only direct connection to the Nabateans that scripture provides is in 2 Corinthians 11:32-33 where Paul speak of escaping from King Aretas at Damascus. From archaeology and historical documents we know for certain that Aretas (probably Aretas III) was king of the Nabateans. 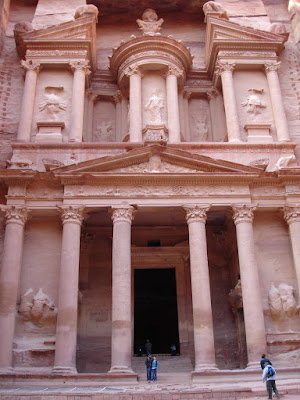 The “Treasury “ or Kazneh (it’s the façade of a tomb that was cut out of a sheer rock face in a mixed style of Roman/Hellinistic/Egyptian/Nabatean architecture) . We did not see Dr. Jones, but we did remember that Jehovah starts with an “I” in Latin. 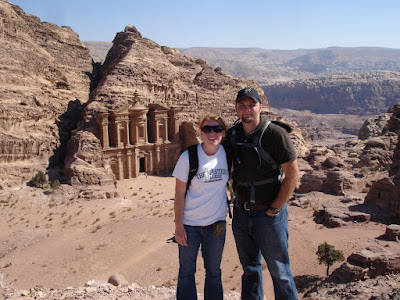 The “monastery” at the highest point of Petra
The next stop was at the wadi Dana – it was a quick stop mainly for the purpose of us understanding the landscape of the kingdom of Edom. From this overlook it is quite clear that Edom was very well protected from the south and west. 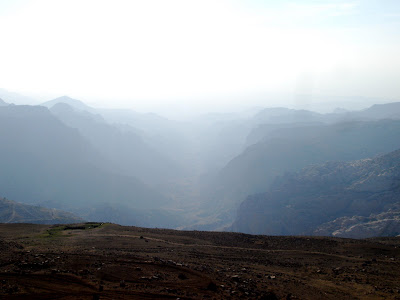 The wadi Dana – the eastern boundary of the Edomite heartland- its all desert after this.
The last stop of the third day was at Bozrah the capital of the Edomites. The archaeological remains of the site are not that well excavated and therefore not that impressive. However, geographically the ancient tell is highly impressive. It is easy to see the potential dominance and strategic impregnability that the ancient Edomite capital once possessed. Bozrah sits on the edge of the Arabah (the valley below the Dead Sea) and is surrounded on three sides by deep, rugged wadis making it virtually impenetrable from those sides. The only side that does not have a deep natural defendable wadi has a very narrow entrance and then expands to a very massive plateau on which the city rested. Edomite biblical connections are far too numerous to mention (Edom is just another name for Esau). Direct Bozrah connections include: Isaiah 34:6; 63:1; Jeremiah 48:24; 49:13, 22; Ezekiel 27; and Amos 1:12. 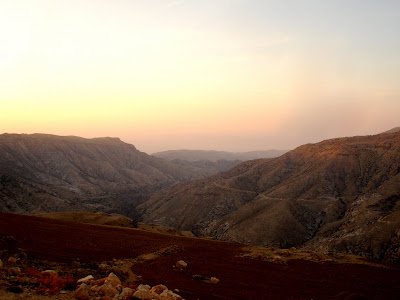 The Arabah from the Edomite capital city of Bozrah
Posted by Chris McKinny at 8:38 AM