The last day of our trip through Jordan was not exactly a full day as almost half of it was spent getting back to Israel (the border closes at 3:00 pm). The time we did have was spent looking at the land of Moab and the Medeba Plateau. Our journey brought us to Kir Hareshet, the wadi Arnon, Dibon, Medeba, and finally Mt. Nebo.

The ancient Moabite capital of Kir-Hareshet sits below the massive Crusader castle of Kerak – the most important castle in Palestine in the period. Masada is directly across the Dead Sea from Kir (we looked at it as we had breakfast). In terms of archaeological remains from the Moabite city – there aren’t any visible. But geographically this site like Bozrah and Rabbah is very impressive, unlike the Judean capital of Jerusalem. It is surround on three sides by deep wadis – not as impressive as Bozrah, but still very well situated. As far as direct Biblical connection Kir’s destruction is spoken of in 2 Kings 16:9 and is prophesied against in Isaiah 15; 22:6; Amos 1:5; 9:7. 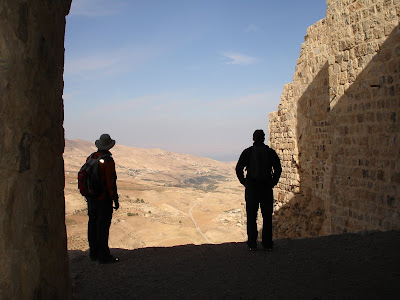 Looking out of the top of Kerak Castle (on top of ancient Kir-Hareshet of Moab) to the Dead Sea and Masada.
The wadi Arnon is a deep canyon that more or less acts as the northern border of Moab (although Mesha’s capital of Dibon was on the northern side of the Arnon). It is directly across from En Gedi across the Dead Sea. It is very deep and very rugged and was a major obstacle to the Transjordanian highway (known as the “King’s Highway”) . 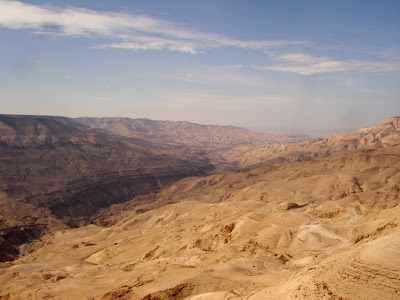 Medeba – specifically the Medeba map is the oldest map in existence (Byzantine period). The eastern oriented map is a primary source for grasping the people’s understanding of the land that they lived in. 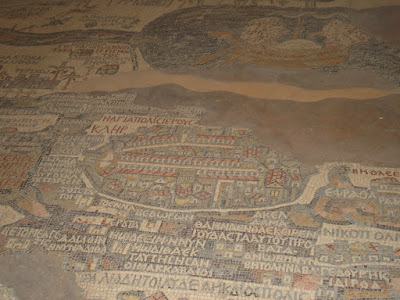 Jerusalem of the 6th century A.D. on the Medeba Map - notice the straight street going north-south (the cardo) this street is still visible in Jerusalem today in the Jewish Quarter

Mt. Nebo – this is the traditional place where Moses looked into the Promised Land and then died (Deut. 34). From this vantage point it is impossible to see all of the things that Moses saw (I think God gave him supernatural eyesight), however, from the top of Mt. Nebo you can see a lot. You can see both watershed ridges, the Jordan Rift Valley, the Hills of Judah, Ephraim, and Manasseh, the wilderness of Judah, the rise of the mountains of Galilee (on a clearer day – I was told), and of course the Dead Sea. 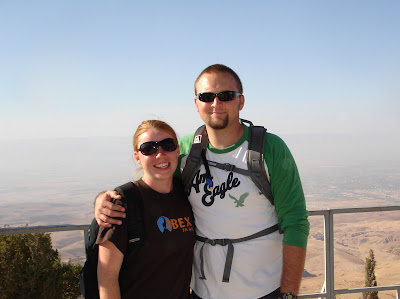 Moses’ view from the top of Mt. Nebo
Posted by Chris McKinny at 2:26 AM

Christopher - I really enjoy your trip reports. Where do you spend the nights on such trips?
How's the food? Granddaddy

Well in Jordan it was a little different than in Israel. In Israel we mainly stay at Hostels with the exception of En Gev on the Galilee field study. When we are in Jordan we stayed at three different hotels. The hotels were actually pretty nice. The food tasted ok at the time, but it did not feel so hot a couple of days later. I think about half of the group, including myself and Mindy, were making frequent visits to the toilet for about a week.

Nice Looking Couple...we are looking forward to seeing this month....