After sleeping in the thriving metropolitan city of Amman we began day number two of our journey through Jordan. The first day’s objective was to understand the regions around the Jordan Rift Valley and the northern seam of the country, geographically the Jordan Rift Valley, Upper Gilead, and Lower Gilead. The second day’s objective was to gain an understanding of the central interior by taking a cursory glance at the Ammonite Basin and the Dome of Gilead. The sites we visited include: Rabbah (Philadelphia in the New Testament) the capital of Ammon, Gerasa (Jaresh), the Jabbok River, and Tyre (Iraq AL-emir).

Rabbah (sometimes called Rabbah-Ammon) the capital of the Ammonites is centrally located in the large Jordanian capital of Amman (approximately 2 million people) and was heavily populated throughout the Biblical period until the 8th century A.D. It is first mentioned in reference to Moses’ conquest of the Transjordanian area (Deut. 3:11). Later in the prophets Rabbah is prophesied against numerous times (Jer. 49:2-3; Ez. 21:20; 25:5; Amos 1:14). The most detailed mention of the Ammonite capital records Joab’s siege and eventual destruction of Rabbah (2 Samuel 11-12). This account is the background of David’s adultery with Bathsheba and murder of Uriah (God accuses David through Nathan saying “you… have killed Uriah the Hittite with the sword of the Ammonites” 2 Sam. 12:9). From the geography of Rabbah (surrounded on three sides by deep wadis – much more naturally protected than Jerusalem – David’s capital) one can make an educated assumption as to the location of the battle mentioned in 2 Samuel. It is clear that the northern part of the city was the most vulnerable. It is the only side that is not naturally protected by a deep wadi. On account of this it might be the location that Joab concentrated his attack and where David murdered Uriah the Hittite through “the sword of the Ammonites.” Apart from the Old Testament references Rabbah/Philadelphia was an important Decapolis city that has vast remains from the Hellenistic period through the Islamic period. 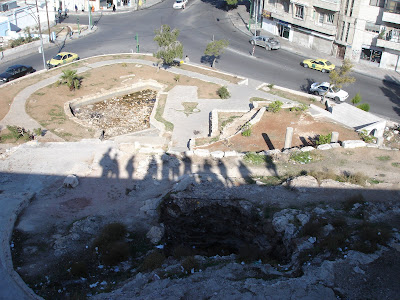 Probable location for Joab’s siege of Rabbah and the murder of Uriah the Hittite (2 Samuel 11-12)
Gerasa (Jaresh) is the most well preserved city of the Decapolis – it was the largest city in the region, a regional capital. Jaresh’s remains are fascinating – it has been called the “Paris of the Middle East” and the “city of a thousand columns.” Most of the remains are from the Roman and Byzantine period. Its only Biblical connection is found in Mark and Luke’s rendering of Jesus’ healing of the demoniac along the Sea of Galilee (Mark 5:1, Luke 8:26,37) (the debate of Gerasa vs. Gadera vs. Gergesa was already mentioned in Jordan Field Study Day 1). 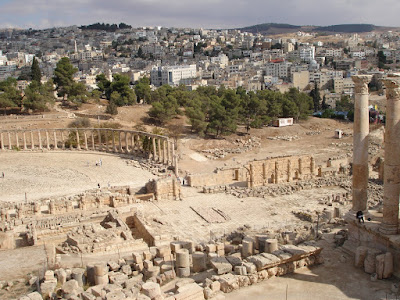 Remains of ancient Gerasa
The Jabbok River in ancient times was a fresh, clean flowing river – now it is not so fresh or clean. It is basically an open sewer. Naturally it would be crystal clear waters but due to some well-aimed fecal matter and other great pollutants it’s browner than iced tea (Yummy, and the best part about it is that Jordanians let their kids play in it). In Biblical times the Jabbok is mentioned in reference to Jacob wrestling with a man and meeting Esau (Gen. 32-33, Hos. 12) and as the tribal boundary of the tribes of Reuben and Gad (Deut. 2:37; 3:16; Josh. 12:2; Judg. 11:13-22). 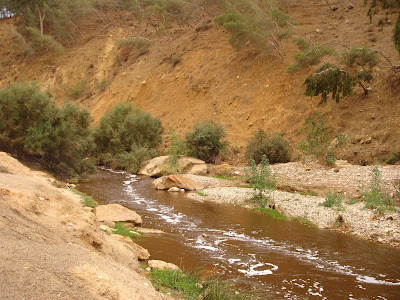 The Jabbok River, also known as Jordan’s port-a-potty. This river was so putrid I can imagine that people go out of their way just to defecate in it. (Notice the bubbles – yummy)
Tyre (Iraq AL-emir) was the last stop of the day. Tyre is the fortified palace of Hyrcanus from the beginning of the 2nd century B.C. Flavius Josephus mentions Tyre along with some historical information regarding Hyrcanus. The palace itself is very interesting with many large lions and other large felines decorating the exterior. 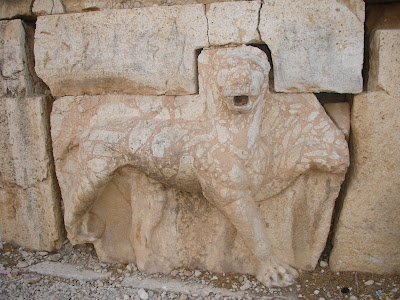 Leopard sculpture on the exterior of Hyrcanus’ Tyre pleasure palace (this sculpture would have probably functioned as a fountain with water coming from the hole in his mouth)
Posted by Chris McKinny at 7:16 AM