For the last field study of the semester our class went to the Hashemite Kingdom of Jordan. My first impressions of the modern state of Jordan was that the nation has been heavily influenced by western culture (especially in Amman – there are dozens of American fast food places – including Popeyes which was ok but nowhere as good as Popeyes in the states) while at the same time still being mired in the Arab/Muslim culture. The marriage of east and west is quite interesting making Jordan very different than other Middle Eastern countries, like Egypt, it is much more western and advanced (which = safer). However, it is far less sophisticated technologically, ideologically, and politically than its neighbor, Israel. Our trip lasted four days in a country that is almost the same size as Israel – there was a lot to see and nearly half of our time was spent driving. The first day of our Jordan trip was spent at three main sites Succoth, Pella, Gadara, and Ramoth Gilead. 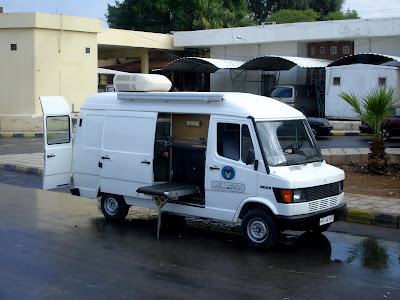 Portable “X-Rays” our professor wandered if it made house calls. In reality it’s a highly sophisticated piece of machinery. Here’s how it works. You pull up to it in your bus and get out (leaving your backpack in the bus – I guess those don’t need to be checked) and then put your bag through this “X-Ray”. Of course if you feel so inclined you could just sit on the bus and not put your bag through and no one would be the wiser. In all honesty this is one of the stupidest things I have ever seen.

Succoth (Tell Deir Alla) sits along the edge of the Jordan Rift Valley right at the exit of the Jabbok wadi (wadi means water canyon or valley). It is important geographically because it sits between the Israelite capitals of Shechem and Penuel east of the ford of Adam. It is first mentioned in Genesis 33:17 after Jacob met Esau (it got its name from the patriarch’s building of booths for his livestock– Succoth means booths – it’s the same name as the holiday). It is mentioned in the Bible during the period of the Judges and the united Monarchy, although it remained to be an important city throughout the period of the divided monarchy. During the period of the Judges the people of Succoth were less than hospitable to a bloodthirsty Gideon who “taught them a lesson” for their inhospitableness (Judg. 8). During the reign of king David it is mentioned twice in the nearly identical Davidic psalms (Ps. 60, 108), which speak of God portioning out “the valley of Succoth”. The last biblical mention is during the reign of King Solomon, which mentions that the metal instruments of Solomon’s temple were crafted between “Succoth and Zarethan” (1 Kings 7:46, 2 Chr. 4:17). The archaeology of Tell Deir Alla bears out the fact that the area was used for metallurgy in remnants of slag from a foundry operating in the 10th century B.C. Archaeologically speaking Tell Deir Alla is a very important site because of the discovery of an inscription that mentions “Balaam son of Beor.” It was the first inscription discovered that mentioned a prophet from the Old Testament by name (Numbers 22-24).

Pella was our next stop. Not much information was given about Pella proper, because it is not directly mentioned in the Bible other than its association with the Decapolis cities (Matt. 4:25; 5:20; 7:31). There are remains from the Chalcolithic period until the 8th century A.D that attest to the importance of the site. It is the sister city of Scythopolis (Beth-Shean), which sits to the west across the Jordan Rift Valley. Both Scythopolis and Pella were strategically vital for controlling the intermediary routes from the International Coastal Highway, the Transjordanian Highway, and the Phoenician port of Acco.

Gadara is at the northern seam of the modern country of Jordan. From the top of the site you can look into Israel (the sea of Galilee) and into the Golan Heights of Syria (the Yarmuk River is the dividing line). It is mentioned in Matthew’s recounting of Jesus healing the demoniac (Matt. 8:28) – “Gadarenes”. There is some debate over this account because both of Mark and Luke accounts refer to the region of the “Gerasenes” (about 30 miles southeast). Some have suggested that Gerasa is used in Mark and Luke to “appeal to a wider audience” because it was a much larger city (cited from the Pictorial Library of the Bible Lands – Todd Bolen). The situation is further muddied by the fact that many texts have Gergesa (on the eastern shore of the Jordan – there is a Byzantine church there commemorating the event – there are also churches at Gadara and Gerasa that commemorate the same event), but this seems to be a later harmonization that some have attributed to Origen. In any case Gadara was an important city during the time of the New Testament sitting between Gerasa and Damascus. The archaeological remains from the late Roman period are fascinating. Most notable among the remains are the basaltic pillars and Corinthian capitals. 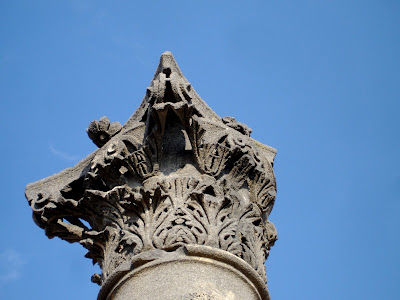 Basaltic Corinthian capital from Gadara – Basalt is one of the hardest rocks. It is formed from volcanic activity. The intricacy seen here would have been extremely difficult to achieve. 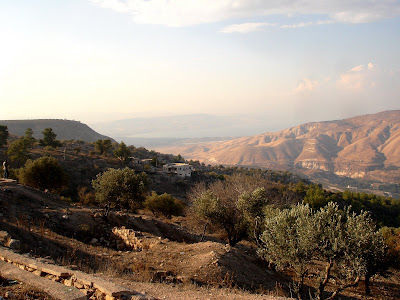 The last site of the day was at one of the possible sites for Ramoth Gilead, Tell er-Rumeith. We arrived just as the sun was going down. The remains at the site are not that impressive, but there are remains of an Iron Age fortress. Ramoth Gilead in the Biblical text is an important Transjordanian city with connections that include: it being a city of refuge (Deut. 4:43, Josh. 20:8), a Levitical city (Josh. 21:36-39), and a battleground for the Syrian-Israelite wars (1 Kings 22; 2 Kings 8:28-29; 9:14-16). 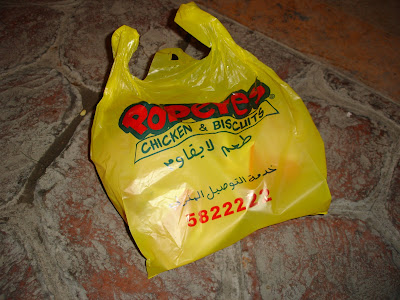 Late night snack in Amman – it might be called Popeyes, but not like I remember
Posted by Chris McKinny at 6:54 AM