Our fourth day around the region of Galilee was full of rain, cold, mosaics, and most of all fun. After three days in and around the Galilee region – Day four was the day we had to go home (believe me if I had the choice I would stay – there is so much more to learn and do) and we spent it by stopping at four stops – Sepphoris, Jezreel, Bet Alpha, and Beth Shean.

Sepphoris (Zippori) sits along one of the most highly traveled routes, which would have carried caravans from the port of Acco/Ptolemias to Gennaserat/Capernaum to Hazor to Dan/Caesarea Philippi to Mesopotamia. During New Testament times Sepphoris was the capital of the region of Galilee up until 17 A.D. when in Herod Antipas made Tiberias his capital on top of a cemetery. After the death of Herod the Great in 4 B.C. the weapon cache of Sepphoris was captured by Jewish Zealots who then used those weapons to control the city. The rebellion was short-lived being snuffed out by the Romans who in so doing destroyed Sepphoris. Over the next twenty-one years Sepphoris was re-built by the Romans under Herod Antipas’ control. What makes this so interesting, you might ask? Who cares, you might say? Well what is interesting is that Sepphoris is less than a half days walk from Nazareth, the hometown of some guy who lived between 4 B.C.-17A.D. What is even more intriguing is the occupation of that certain someone’s father. (Matthew 13:55a Is not this the carpenter's son?) Carpenter is probably an oversimplified translation of the Greek tekton, which should be understood as craftsman or builder – more than just a woodworker – our common understanding of a carpenter. Joseph would have almost certainly worked at Sepphoris and one could make a good argument that his son worked there as well, he would have been in his teen years and early twenties during the end of the construction. 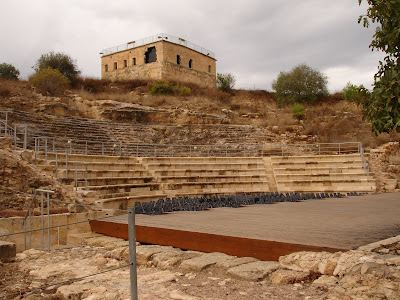 Theatre at Sepphoris built during New Testament times
Besides the connection to the author of heaven and earth, Sepphoris also has some amazing mosaics from the later Byzantine period, including the “Mona Lisa of the Galilee” and the beautifully crafted floor of a synagogue (albeit very Hellenized). 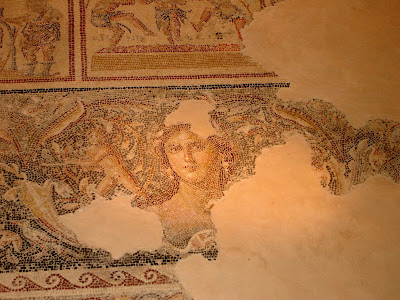 The “Mona Lisa of the Galilee” crafted during the Byzantine period
Jezreel was a very quick stop due to the downpour, but we discussed the major biblical stories pertaining to the site (Ahab and Gideon). From there we went to a really interesting 6th century A.D. synagogue at the kibbutz of Bet Alpha. This synagogue like the one in Sepphoris has a beautiful floor made out of mosaics. Both of the mosaics include the depictions of the “Binding of Isaac” and the “Zodiac Calendar.”

The last stop of the day was at Beth Shean (Scythopolis in the NT). This city sits in the middle of the Beth Shean Valley centrally located between the two international routes in the country – the International Coastal Highway (west – to Egypt and Mesopotamia) and the King’s Highway (east – to Yemen and Mesopotamia). This site is at the crossroads of three continents connecting all of the best routes together. Saul and Jonathan’s bodies after decapitation were hung on the walls here (1 Samuel 31) and Jesus would have passed the city numerous times in his travels between Galilee and Judea. 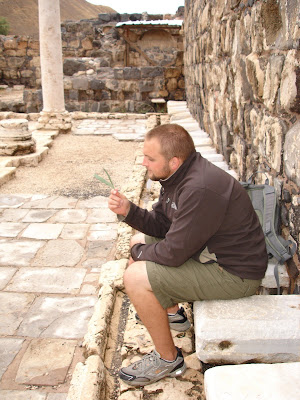 Pondering the ancient "deed"in the sophisticated Public W.C.'s of Scythopolis 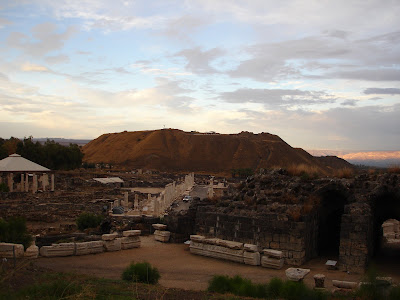 The 8th century remains of Scythopolis with Tel Beth Shean in the background
Posted by Chris McKinny at 7:19 AM

Thanks for writing...i love reading what's going on...the pics are great and it's good to know what you're up to in Israel!