Day three of our trip was spent in and around the Sea of Galilee. Despite the rain that rolled in and out of the region all day I had a great day. Our major stops for the day were the Sea of Galilee (a boat ride), Kursi, Qazrin, Capernaum, and Mt. Arbel. All of these sites served to open a window into the New Testament world of Israel’s Messiah.

The boat ride on the lake was really enjoyable – it was foggy and rainy which gave us a sense of what the lake would have been like during stormy weather. The first mate of the ship was an interesting fellow who “volunteered” to show us how the cast-net worked in biblical times. His first attempt was unsuccessful – hitting the boat and falling unopened into the sea – but he did not give up he proclaimed, “I will try the other side” – and so he did. This time he succeeded. 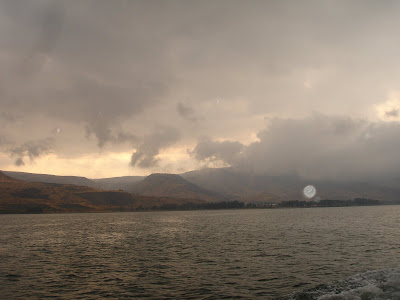 Eastern coast of the Sea of Galilee with Hippus (Susita) one of the cities of the Decapolis and the En Gev kibbutz in view
Our next stop was Kursi where there is a church from the byzantine period that commemorates the area as being the place where Jesus healed the demoniac and cast the demons into the pigs (Mark 5). The church was well preserved and the view from the top of the hill was nice.

The Talmudic village of Qazrin was our next stop. The city was discovered and excavated after the Six-Day War when Israel pushed their tanks all the way to Damascus. It has remains from the Talmudic/Byzantine period with many blocked homes called Insula, some of which have been reconstructed. This site is significant to students of the New Testament and/or the Talmud because it preserves the style of homes employed during those periods. This provides a cultural window into this most interesting of periods. These reconstructions provide key insights to illuminating the parables pertaining to everyday life crafted by the Alpha and Omega.

After a quick stop at the Jordan River we went to Capernaum the home base of Jesus during his ministry. When we got to the entrance of the site the bottom of the sky dropped out and we were utterly drenched. We holed up in the Franciscan Church/”Millennium Falcon” until the storm passed. During the storm we looked at the remains of three different churches built on top of one another – many believe that this is the actual site of Jesus home during his ministry and the home of Peter and his mother-in-law. (Matthew 8:14-15 And when Jesus entered Peter's house, he saw his mother-in-law lying sick with a fever. He touched her hand, and the fever left her, and she rose and began to serve him.) After the storm we went to the 2nd century synagogue that has remains of a 1st century synagogue below it. The synagogue below it in all probability would have been the synagogue where Jesus must have taught regularly over his three plus years of ministry (Mark 1:21 And they went into Capernaum, and immediately on the Sabbath he entered the synagogue and was teaching). 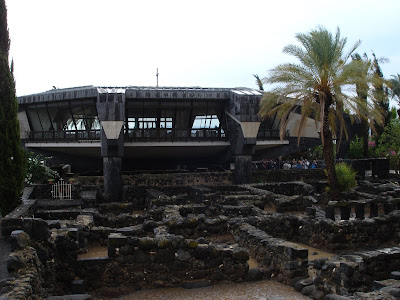 Franciscan church built over the traditional site of Peter’s mother-in-law’s house – it resembles in this author’s estimation Han Solo’s pride and joy.
See for yourself http://blogs.sun.com/kevin/resource/m-falcom.gif 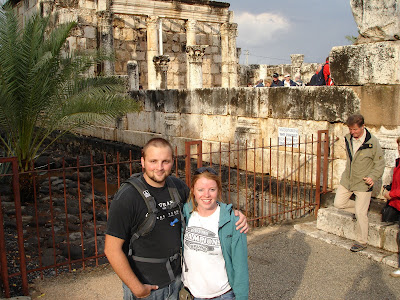 My pride and joy in front of the Capernaum synagogue – the lower basalt (darker) layer is the foundation and remains of the synagogue Jesus would have taught in
Our last stop of the day was Mt. Arbel – this is one of the most amazing places in all of Israel – I think it is my favorite. Arbel overlooks the Sea of Galilee and the surrounding hills and plains. It has a sheer cliff on its face with a sister cliff across from it at the bottom of the cliffs is the “Valley of the Doves” which in Ancient times carried the International route to Mesopotamia (north) and Egypt (south). While we were up there we saw a rainbow above the plain of Gennesserat going over the Sea of Galilee. 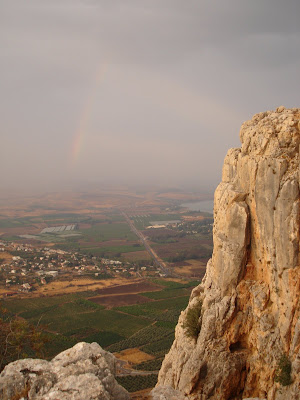 Posted by Chris McKinny at 9:47 AM