After a restful night at En Gev holiday village our group set out for the Huleh Basin and the Golan Heights. It is amazing to think of the difference between this fertile, wet area of the country and the dry, dead Negev and it is only separated by a couple of hours of driving. The difference is 180˚ and it is reflected in the peoples and the cities. In the Negev there are sparse settlements and nomadic peoples, but in the Galilee region it is very heavily populated and farmed. The second day of our Galilee trip was spent looking at the fertility of the region by going to four main sites – Hazor, Dan, Banias (Caesarea Philippi), and Har Ben Tal.
The first site of the day was Hazor. It sits along the International Route that connects Egypt with Mesopotamia at a natural crossing point that sits above the swamps of the Huleh Basin along the northern rim of the Rosh Pinna Sill. All travelers going north or south would have passed by this city – possessing Hazor is extremely vital to protection and economic stability. This is seen clearly through historical texts (the Bible, Mari archive, and Ostracon found at Hazor) and archaeology. During the time of the Conquest and Judges Hazor played a vital role – the ruler of Hazor (Jabin) was called the “head of all those kingdoms” in Joshua 11:10 and the “King of Canaan” in Judges 4:23-24. Apart from the Biblical connections Hazor is probably the most important archaeological site in the country, because it was the first site that was completely carried out by Israeli archaeologists. Excavations began in the 1950’s under the direction of Yigal Yadin. Current excavations are being directed by Amnon Ben Tor of Hebrew University and as of now it is my top choice for digging this summer. 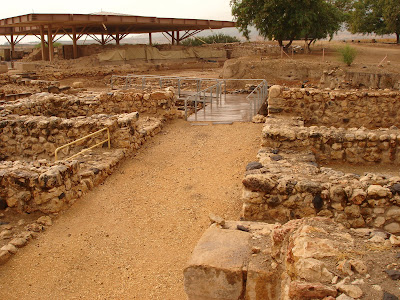 Iron Age I gate built by Solomon – there are similar gates at Megiddo and Gezer - 1 Kings 9:15 And this is the account of the forced labor that King Solomon drafted to build the house of the LORD and his own house and the Millo and the wall of Jerusalem and Hazor and Megiddo and Gezer 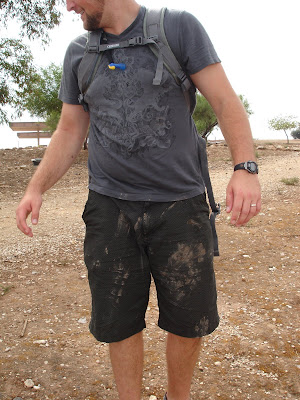 Side-note – while we were at Hazor I was attacked by a playful mongrel who did not understand that jumping on people in the mud is not a good thing – and who caused me to break the commandment against murder “by hating…in my heart.” On second thought maybe Hazor is not my first choice – I might get arrested if I come into contact with that mangy mutt again.
After Hazor we went to one of the coolest places in the country – Tel Dan. Dan sits along the northernmost border of Israel in both ancient and modern times “Dan to Beersheba” (1 Sam. 3:20). The tel sits on one of the four major springs that merge and form the Jordan River (Dan spring). Throughout the site there are streams and rapids that would remind anyone of Big Sur in California or even the Road to Hana in Maui. Historically speaking Dan is usually the first to fall whenever attacks come from the north (Syria, Assyria, etc.). It is mainly mentioned in the Biblical text in reference to Jeroboam the son of Nebat (who caused Israel to sin) who made Dan a holy place by setting up and altar and calf there (1 Kings 12:29) – a direct violation of the 1st commandment (Exodus 20). Dan is also an important site in the discussion of the historicity of King David. In the early 1990’s Avraham Biran found an inscription on a stone that was in secondary use (built into a later wall) that mentions “beit david” the house of David. 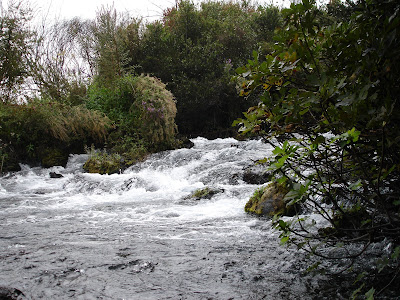 Headwaters of the Jordan at Dan (5,000 gallons/minute)

The last major site of the day was Banias (Caesarea Philippi), which is only 2 miles away from Tel Dan. This site, like Dan, sits along one of the springs that merge into the Jordan River, the Banias spring. Banias was important during the time of the New Testament, because Herod built a temple to the god Pan (Roman fertility god that has the appearance of a faun – think Mr. Tumnus) and his son Philip the Tetrarch developed the town even more. Peter proclaimed that Jesus was the “Messiah the Son of the Living God” at Caesarea Philippi (Matthew 17).

The last site of the day was at the top of Har Ben Tal which was a key strategic spot in the Six-Day War (1967) and the Yom Kippur War (1973). It is a volcanic cone that sits in the midst of the clouds. During biblical times it was also a key strategic spot for the many battles between Israel and Aram-Syria. 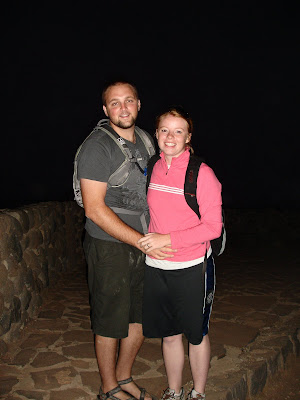 On top of Har Ben Tal – you can’t see much, but it is a good pic of me and my beautiful bride, so there you go
Posted by Chris McKinny at 4:08 AM