The first day of our Galilee trip was spent along the coast and in the Jezreel valley. The day was clear at first, but quickly became hazy and rainy. A lot of the day was spent getting to the Galilee, so we did not go to a lot of different sites. The day was focused on three major stops: Caesarea, Mt. Carmel, and Megiddo.

Herod the Great built the town of Caesarea around 20 B.C. atop the Phoenician port, which is known as Strato’s Tower. It is one of the most amazing achievements of Herod’s much-storied building career, which includes Masada, Herodium, the Temple Mount, and numerous other massive projects. The three most astonishing structures in the city of Caesarea are the palace in the sea, the harbor, and the aqueduct. The palace of Herod was built upon a Khurkar rise (calcified sand – basically sand-stone) that juts into the sea. In the middle of the palace there was a fresh water swimming pool for Herod and his distinguished guests. The harbor was built out of the local kurkar and underwater cement imported from Rome. It is built in an area where there is no natural port, nothing to hold on to or even to block the winds from the north or the sands and silt from the south. Its construction is truly one of the marvels of the ancient world. The well-preserved aqueduct stretching from Mt. Carmel to the city is also a monumental piece of ancient construction. 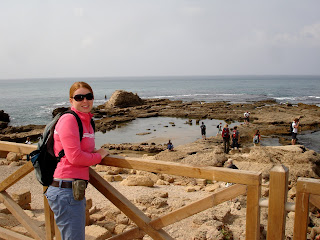 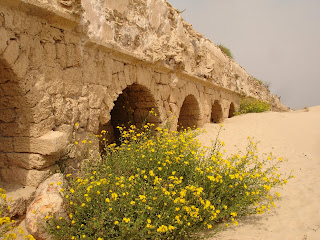 Herod the Great’s aqueduct that takes water from the spring atop Mt. Carmel 12 miles south to the city of Caesarea 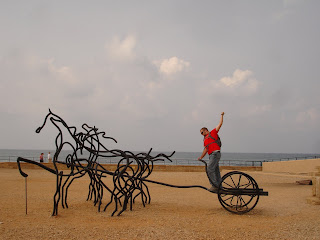 “Racing” in the Hippodrome at Caesarea
Caesarea is a major city in the time of the early church. Paul comes here numerous times during his missionary journeys (Acts 9:30, Acts 18:1), as well as being imprisoned here before being sent to Rome (Acts 23-26). Peter witnessed to Cornelius here (Acts 10,11). King Agrippa I was killed by God here, because he did not “give God glory” (Acts 12 and Josephus).

Our next stop was an overlook of the Jezreel atop Mt. Carmel – the view was not good – it was very, very hazy, but we made do. Dr. Wright used the surrounding storms and thunder to illustrate Psalm 29 and the Psalmists imagery of God’s awesome voice and attributes through the powerful effects of the thunderstorm upon Israel’s environment. We also discussed the story of Elijah vs. the prophets of Baal or more specifically Yahweh vs. Baal (1 Kings 18).

The last site of the day was Megiddo – since we only had 30 minutes to run through the site – we mainly discussed the geographical features that make Megiddo the most important site in the Jezreel Valley and one of the most important sites along the International Highway. This site has much controversy surrounding it mainly pertaining to the different theories put forth about the Iron Age gate that matches the gates at Hazor and Megiddo. (1 Kings 9:15 And this is the account of the forced labor that King Solomon drafted to build the house of the LORD and his own house and the Millo and the wall of Jerusalem and Hazor and Megiddo and Gezer.) All in all it was a good day in the field with Caesarea being the main highlight visually and Mt. Carmel the main highlight spiritually. 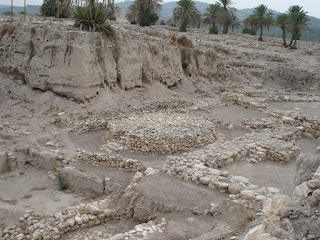 Early Bronze Age altar in the “trench” of Megiddo – the cultic site has three different temples surrounding this altar
Posted by Chris McKinny at 5:28 AM