The Setting of The Song of Moses - Deuteronomy 32

Tomorrow I am preaching at my church, Country Bible Church in Taft, TX. My text will be Deuteronomy 32 - aka the song of Moses (Deut. 31:30). As I have repeatedly read through this chapter of Scripture I have been struck by how specifically the flora, fauna and overall geographical setting of the passage matches that of Israel's contemporaneous political positioning.  Namely - their encampment in the "Plains of Moab" after conquering the western side of the Transjordan hill country (outlined green on map) from Moab to Bashan (Deut. 32:14).  This specific location looks over the general area of Sodom and Gomorrah (Deut. 32:32) and became the spot where the great leader, Moses, gave up the ghost (Deut. 34 - Mt. Nebo).  To illuminate this point it is vital to establish both what is mentioned and what is not mentioned. 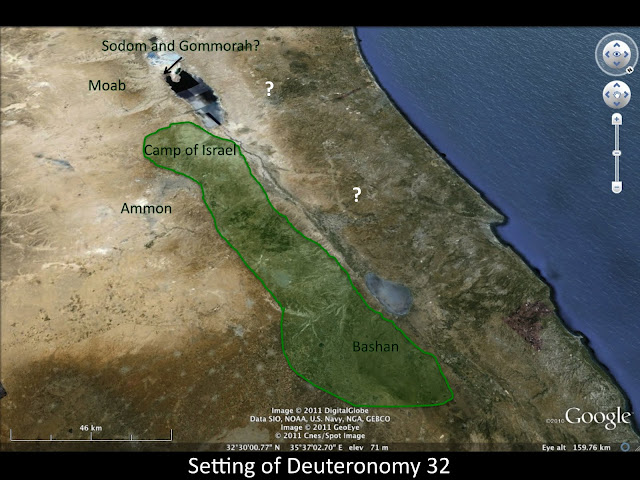 Mentioned: desert land, waste of the wilderness, eagle, high places of the land, produce of the field, honey from the rock, oil from the flinty rock, curds from the herd, milk from the flock, fat of lambs, rams of Bashan (Golan Heights), very finest of the wheat, foaming wine, blood of the grape, vine of Sodom, fields of Gomorrah, grapes of poison, bitter clusters, poison of serpents, venom of asps.

Not mentioned: no city west of the Jordan, hill country, trees, wine from coast or CisJordan hill country (wine mentioned is explicitly from Bashan and Sodom and Gomorrah), fox, bears, lions, non-carrion birds.

If this passage was created by a Judean living in the late 7th cent. BCE (or anytime after 1400 BCE for that matter) then he certainly had a keen eye for deceptive detail and a flair for illusory authenticity.
Posted by Chris McKinny at 10:32 PM