As most of my (vast) readership knows - I play football in Jerusalem - this experience has been eye-opening on a number of levels.  For one I have discovered football is the greatest game ever invented and it's not even close - in what other sport do you get to literally pummel someone who is not looking at you and then turn around and use basketball skills to make a catch in traffic.  On a more philosophical side I have discovered that football in Jerusalem is a sort of melting pot for religious discussion and ideas.

My teammates range from ultra-orthodox Jews to moderately religious Jews to atheist Jews to Muslims (although a couple of the guys are considered religiously Muslim and Jewish - mom is Jewish, father is Muslim) to me - evangelical (although it seems that there is almost one believer on every team - funny how God worked that out).  To say that I have been given opportunities for religious discussions would be a major understatement. 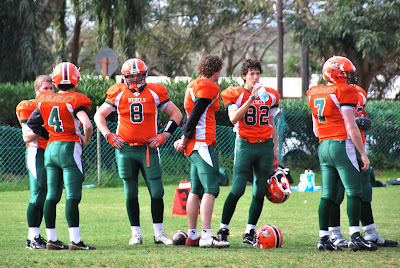 My teammates for the most part are very interested in my beliefs - mainly because they have no paradigm to put me in.  On the whole the majority of them have only come into contact with "Christians" through their parents, rabbis, or teachers' warnings.  This makes for interesting discussion - for instance I can't count how many times people have told me that they thought I was Catholic.  Normally this would be a personal cause for alarm and a quick denial, but for people that have never come into contact with Christians, except through the Holocaust, Czarist Russia, and the Crusades (thank you so much Christian Europe for your apostasy that makes Christ stink to Jews - you guys are the best), I usually let it slide and give them an explanation - why my only priest is after the order of Melchizedek.
Posted by Chris McKinny at 3:05 AM

I still think that is awesome that you get to play football POST college graduation! Football is awesome. You should post on some of the conversations you've had with some of your teammates. I'd be interested to know some of their beliefs and how they've responded to the gospel.